Semper Fidelis or often shortened to Semper Fi is the motto of the US Marine Corps and is Latin for “Always Faithful” or “Always Loyal“. US Marines have been protecting their nations interests since November 10th, 1775 when they were formed to fight for independence at sea and on the shore. By congressional mandate the Marines are their nations rapid response force. 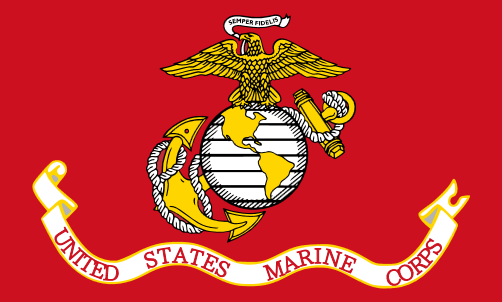 The Marine Corps have fought in all conflicts the USA has been involved in since 1775 and are famous for storming the beaches in the Pacific during World War Two and also in the Korean War (1950-1953) and the Vietnam War (US combat units were involved from 1965 to 1973). This is only one of their roles though and with  a highly mobile air, land and sea capability they have fought beyond the beaches into the desert, jungle and mountains.

The Battle of Iwo Jima in the Pacific raged from February 19th to March 26th 1945. It is probably the most famous battle the Marines have ever undertaken. The island of Iwo Jima was a strategic stepping stone to Japan and as such was heavily fortified by Japanese defenders who would not surrender and would defend their nation at any cost . A key defensive point of the island were the tunnels and bunkers within and around Mount Suribachi. From here the Japanese could not only defend the island but also launch surprise attacks and lay well planned traps for the Marines.

Heavy casualties were sustained by both sides, but by the 4th day of the battle Mount Suribachi was taken and the American flag was raised to encourage the Marines below to strive on to win. A photo of the flag raising taken by Joe Rosenthal went on to become one of the most famous in history and a key symbol for the US Marine Corps (it was actually the second flag raising for the day, the first flag was too small to be seen from a distance). The Marines eventually prevailed and took the whole island, but it was a bloody battle. Of the 22,000 Japanese defenders nearly 19,000 were killed. The Marines lost nearly 7,000 men and almost 20,000 were wounded.

Famous battles following World War Two have included brutal ones against an enemy who came in significantly greater numbers in places like the Chosin Reservoir in North Korea in 1950. Under harsh cold weather conditions, in steep terrain a 17 day battle occurred where Chinese troops (fighting in behalf of the Communist North Korea) surrounded and outnumbered the Marines 8-1 but were decimated with the loss of 10 Chinese divisions! This allowed the Marines to withdraw and rejoin UN forces – this was a fighting withdrawal through enemy lines to the sea which was 40 miles / 64 kilometres away!

“I have just returned from visiting the Marines at the front, and there is not a finer fighting organization in the world!”

– General of the Army Douglas MacArthur on the outskirts of Seoul, Korea, September 21st, 1950

Later in the Vietnam War there was the 77 day siege (commenced January 21st, 1968) of the American combat base in Khe Sanh by North Vietnamese forces in which with the aid of air and fire support along with determined courage the Marine Corps prevailed in their defence of the base. Alas it was eventually all for nothing as the base had to be abandoned in July 1968. Horrific and fierce fighting like this has become the credo of the Marine Corps. Where ever trouble brews they will be their to fight the good fight.

The ultimate tribute to these brave men and women can be found in Arlington, Virginia. Just outside the Arlington National Cemetery is the Marine Corps War Memorial that was inspired by the photo taken atop of Mount Suribachi in Iwo Jima. It is an impressive and very large monument which should not be missed on a visit to Washington DC or the cemetery.

My respect goes out to anyone who has ever served in the US Marine Corps. The motto of Semper Fi could never be more appropriate!