One of my favourite movies from the 1980’s is the cult classic The Blues Brothers. The movie was directed by John Landis and starred John Belushi as “Joliet” Jake Blues (John was born in Chicago in 1949. Sadly he died in Hollywood in 1982. Far too young at just 33) and Dan Akroyd (a Canadian born in Ottawa in 1952) as Elwood Blues.

The story for The Blues Brothers was developed from the same characters they had played on Saturday Night Live and was about two blues music loving, orphaned “brothers”, who following Jake’s release from Joliet Prison were on a “mission from god” in their Bluesmobile to save their childhood orphanage in Chicago from foreclosure. They plan to do this by getting “the band back together” to put on a big show at the Palace Hotel Ballroom. The only problem was their obvious disregard for the law and a dislike of Illinois Nazi’s! Mayhem soon followed and throughout the movie they are pursued by everyone from the State Troopers, Chicago Police and Nazi’s to cowboys, an ex-girlfriend and even the National Guard! Brilliant!

The movie had the perfect balance of comedy, classic lines, great music and plenty of action in the form of many classic car chases resulting in the demise of a mall and one of the biggest and most destructive car chases you will ever see through the streets of Chicago. This was also one of the greatest car chases to ever appear on film!

There were also a huge number of cameo appearances by famous singers, actors and directors including Ray Charles (Ray the owner of Ray’s Music Exchange), James Brown (Reverend Cleophus James), Cab Calloway (Curtis), John Lee Hooker, Aretha Franklin (Mrs. Murphy), Carrie Fisher (Mystery Woman – basically a vindictive former fiancée shunned by Jake), John Candy (Burton Mercer – Jake’s Correctional Officer), Frank Oz (of The Muppets and Yoda fame – he was one of the Joliet Prison guards),  Paul Reubens (Chez Paul waiter who was later to become famous as Pee-wee Herman), John Landis was one of the troopers, Steven Spielberg (a clerk in the Cook County Assessors Office) and even Twiggy the British model (Chic Lady) who was stood up by Elwood at the West Wind Motel.

The Bluesmobile was a big part of the movie and in the hands of The Blues Brothers sped, spun, jumped and outrun its way to saving the orphanage. The car was a  1974 Dodge Monaco that is mentioned in the movie as an ex-police car and described by Elwood as follows: “It’s got a cop motor, a 440-cubic-inch plant. It’s got cop tires, cop suspension, cop shocks. It’s a model made before catalytic converters so it’ll run good on regular gas.” He tells Jake when he picks him up from the prison in this car that he had traded the earlier Cadillac Bluesmobile for a microphone!

The Blues Brothers Band in the movie was made up of many well-known musicians who basically played themselves. They were Matt “Guitar” Murphy on lead guitar, Steve “The Colonel” Cropper on guitar, Donald “Duck” Dunn on bass (he passed away at the age of 70 in 2012), Murphy “Murph” Dunne on keyboards (while Jake was in Joliet Prison he has a lounge act at the Holiday Inn called “Murph and the Magic Tones” which has many of the members of The Blues Brothers Band in it), Willie “Too Big” Hall on drums, Tom “Bones” Malone on trombone/saxophone/trumpet, Lou “Blue Lou” Marini on saxophone and Alan “Mr. Fabulous” Rubin on trumpet (he passed away in 2011 aged 68). A great band!

The Blues Brothers Show Band and Revue were actually a real band performing from 1978-1982 as a spin-off from the Saturday Night Live characters, with John Belushi and Dan Akroyd on vocals (they also played live on SNL). Following Johns death the band has continued to perform  on and off since reforming in 1988 with guest vocalists and even with some line up changes Dan Akroyd, Steve Cropper and Lou Marini are still there. These days the lead vocals spot of Jake Blues has been taken by Zee Blues who appropriately is John Belushi’s real life brother Jim Belushi.

Recently I was in Chicago and I just had to visit some of the movie locations around the downtown and south side area. The website Blues Brothers Central provides all the information you need and is a great resource with precise map locations and lots of movie information (a big thanks goes out to them for many of the movie screen shots too). I have only ever really done this before for another favourite movie from around that time in Mad Max. I thought it would be fun to share some scene shots with you as a then and now retrospective.

On their drive to the Hotel in the Bluesmobile The Blues Brothers passed the Oriental Theatre at Randolph and State in downtown Chicago. The signage has changed along with a number of buildings that have come and gone since 1980.

I was surprised to read that the hotel where Elwood Blues lived with that tiny room with the trains going past the window was actually a real place (the Plymouth Hotel – a real dive)! Jake asks Elwood “How often does the train go by?” and Elwood responds “So often you won’t even notice it.”. Apparently the movie makers paid the train company to send extra trains passed the window! The Plymouth Hotel has long since been demolished but I did have a similar experience in my own accommodation in Chicago which I found highly amusing (luckily the place I stayed doesn’t really shake like Elwood’s place each time a train passes)!

East 47th Street on the Southside of Chicago was the location for Rays Music Exchange which for over 50 years has been the real location for Shelley’s Loan Co. Today the movie signage is gone, but the mural that was there in 1980 remains, albeit very faded. This is an “interesting” neighbourhood to say the least, I had lunch in a nearby chicken shop and was served from behind very thick bullet proof glass. Don’t go there at night and you should be OK!

Very little has changed from the scene in which the mounted police join the chase for The Blues Brothers. This scene was filmed on N. Franklin St, just south of Lake St near downtown Chicago. Some of the buildings fronting the street look like they are gone or have been renovated but that’s about it.

La Salle Street Bridge is where the Chicago water police join the chase for The Blues Brothers. Not much has changed in the immediate area since 1980 other than the skyline further down the river. I couldn’t quite get the same shot as in the movie simply because the next bridge along the river was closed for repairs, but you can still get the general idea of what it looks like today.

The Bluesmobile jumps a Chicago police car on the Lower Wacker Drive on/off ramps on Monroe Street. The layout of the intersection has changed a bit and the ramps are different but it still looks much the same today. The buildings around it have changed significantly though. You can’t stop progress and 33 years is a long time!

Following the massive car chase through the streets of Chicago there is also a massive police car pileup under the La Salle and Lake Street L Train. Today apart from a change in the buildings around it, the rail line and intersection hasn’t changed at all. Ironically while I was taking a look around the police car pile up scene there was a pretty beat up Chicago Police car parked nearby. Waiting for Jake and Elwood to return perhaps?

Towards the end of the movie The Blues Brothers reach their final destination, the Cook County Offices at Daley Plaza where they will pay the fee to keep the orphanage open. This plaza which they drive so haphazardly across is in real life the Richard J. Daley Plaza at  50 W. Washington Street. Nothing much has changed at all here in over 30 years! The Picasso art installation is still there along with the trees. There are perhaps a fewer pigeons about, but that’s about it!

The Cook County Offices right at the Daley Plaza has also changed very little in the past 30 years. The doors look different and it appears that during the movie they put up some barricades (that looked like they were part of the building) to protect the other doors from the Bluesmobile smashing through them, but that’s about all that has changed since 1980.

I love this movie and I hope you have enjoyed my reminiscing and my take on some of the filming locations. The Blues Brothers is just one of those movies that can never be re-made and while the 1998 Blues Brothers 2000 sequel was entertaining and featured many of the original movies actors and musicians, it was never going to come close to the first one. If you have never seen the original or haven’t watched it for years, take a look, you wont be disappointed. Hit it! 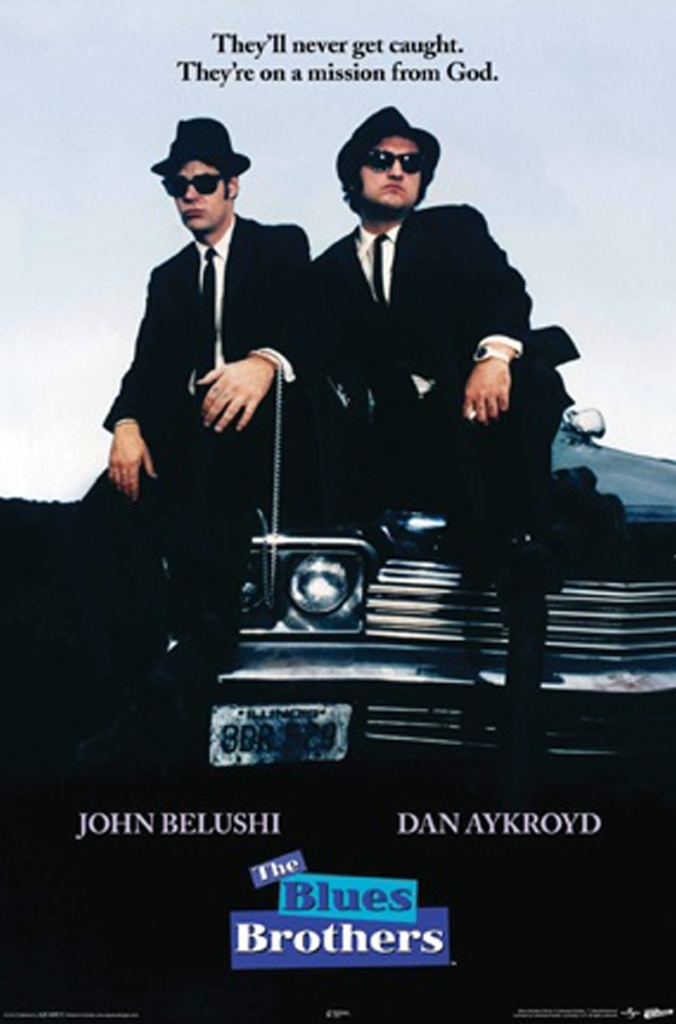