Tillamook Air Museum near the coast in Oregon has a great collection of historic military aircraft which are predominately WW2 themed but they also have some modern jet fighters. Other aircraft include helicopters, gyrocopter’s and civilian aircraft. They have over 30 aircraft in the collection but not all are always on display.

Many of the aircraft still fly including a very rare Japanese WW2 Nakajima Ki-43 Oscar. They also have a Hispano HA-1112 Buchon which is a Spanish version of the German WW2 Messerschmitt Me-109G, but it has a Rolls Royce Merlin engine instead of the Daimler-Benz DB605A – this one was actually used in the 1969 Battle of Britain movie to act as a German fighter (purchased from the Spanish Air Force).

One unusual aircraft on display is the “Alien Blimp“. I don’t know the history of this blimp, but it’s cool in a weird way.

Apart from the aircraft, the other interesting thing about the museum is the building in which it is housed, Hangar “B”. This just happens to be the largest wooden structure in the world! 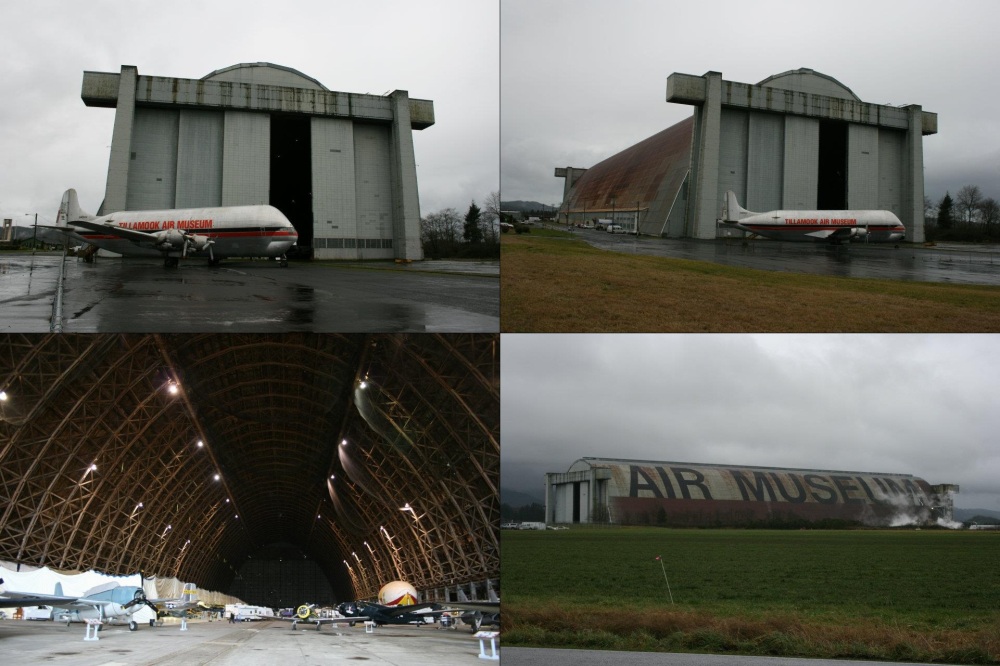 In 1942 during WW2 the US Navy required long-range patrol capability around the US coastline to detect enemy submarines and protect shipping convoys. They used K-Class Blimps to conduct these patrols and built 17 giant wooden hangars around the US to house and protect the blimps. Two of these hangars were built at the then Tillamook Naval Air Station (“Hangar A” and “Hangar B”) to protect the Oregon and Washington coastline. The base was in use until 1948.

The museum shows a movie on the construction of the hangars which was not easy. The land had a water table beneath it, this along with winter weather made for hard, wet, muddy construction work. In such difficult circumstances the first hangar (Hangar “B”) took almost 9 months to build, but valuable lessons were learnt and Hangar “A” was built in just 27 days!

The hangars were truly massive projects:

The massive hangar doors are 37 metres / 120 feet tall and are made up of 6 sections that weigh 30 tonnes each!

During WW2 the base had 8 K-Class blimps which were 77 metres / 252 feet long (all 8 could actually fit into just one hangar, but I guess operationally it was more practical to operate them from 2 hangars). The Hangars were required to protect the relatively fragile materials of the blimps (some were destroyed on the ground in high winds when not in protective housing). Regardless of their potential fragility, blimps were perfect for patrolling the oceans as they had a range of 3200 kilometres / 2000 miles and could stay aloft for up to 3 days.

After the war the hangars were used for many purposes including operating as saw mills and as storage facilities. In 1992 Hangar “A” was being used to store hay, some how a fire started and the building was quickly engulfed in flames and destroyed. Hangar “B” has been home to the air museum since 1994.

Of the original 17 hangars built in the US, 10 have been destroyed. Apart from Tillamook, there are 4 in California and 2 in New Jersey that remain today.

Given the size of Hangar “B” the museum aircraft collection actually only takes up about half the floor space. As such the owners sensibly rent out the rest as a storage facilities for things like mobile homes, trailers and boats. This helps pay for the maintenance of the facility and contributes to keeping their magnificent flying machines in the air.

The museum is well worth a visit if you are into aviation or even if you just have an inner “George Costanza” fascination with architecture (I like both)! They often have flying days were they take some of the collection up for a spin which would be well worth seeing too. Unfortunately my visit coincided with wet overcast weather and was most definitely not a flying day!