I don’t normally go and see tribute bands, but as I have mentioned in an earlier blog I am a huge fan of both Black Sabbath and AC/DC, so the combination of a Problem Child (AC/DC) vs. Bastard of Reality (Black Sabbath) tribute show at the Tractor Tavern in Ballard (Seattle) got me interested. I had to check it out.

First up was Bastard of Reality, they had the look of Ozzy and Co, but the most important thing was they had the sound! The music and singing were spot on, and the sound guy had things set perfectly. They played a great set including Black Sabbath, War Pigs, Sweet Leaf and Fairies Wear Boots. I was impressed!

Then Problem Child hit the stage (there are a number of tribute bands in the US that go under this name, but this band are the local Washington State variant). They pay tribute to both the Bon Scott and Brian Johnson eras of AC/DC and have two different lead singers to match the vocals of each. The singer doing the Bon era sang with Bon’s voice and tone so perfectly that myself and fellow Aussie David looked at each other in amazement when he started his first song and we both said “he sound’s just like Bon“! They also had an excellent lead guitarist playing the part of Angus Young with the school uniform of course (he even did the famous Angus flash of his bum). They played all the great songs from both eras (at one stage the singer from Bastard of Reality took over from “Angus” to play guitar for a song too). Once again I was impressed and had a great night (my ears are still ringing)! Check them out if you get a chance.

“Acca Dacca” will always hold a special place in my musical tastes. I grew up listening to them in Australia (where it all started for the band) and they were the first hard rock band I really got in to.

AC/DC was formed in 1973 in Sydney, Australia by brothers Angus Young and Malcolm Young, with original singer Dave Evans, Rob Bailey on bass and Peter Clark on the drums. Bon Scott who was previously a singer in a number of Australian bands including The Valentines and Fraternity (he was a very different performer before AC/DC!!!) replaced Dave Evans in 1974 and remained the lead singer until his tragic alcohol induced death on February 19th, 1980 in London, UK. Bon lived life hard and fast, gone at 33 years of age, just when the band were making inroads into the US after conquering Australia and Europe.

That tragic event could have been the end of AC/DC but they decided to go on and recruited Brian Johnson who took over vocals in 1980. He was the lead singer of UK band Geordie and had a very different voice and style to Bon, but it worked and he along with Angus was the key to their future success in the US and beyond (his first AC/DC album Back In Black has sold over 40 million copies worldwide). Outside of the Young brothers the other band members changed a lot over the years but the other key members are Cliff Williams (bass –  1977 to present) and Phil Rudd (drums – 1975-1983 and 1994 to present – he is actually the only Australian born member that is currently in the band – with the others being born in the UK/Scotland).

My first memory of ever seeing a music video was AC/DC’s Jailbreak a brilliant song released in 1976 (when I was 4 and a half years old)! Back then they would appear on Australian music TV shows all the time, fronted by the legendary Bon Scott  and Angus Young as the eternal schoolboy. These appearances made for some memorable moments especially a 1975 performance on Countdown (a revered music show in Australia in the 1970/80’s which families would watch together on a sunday night) where Bon Scott was dressed as a school girl, smoking a cigarette and singing Baby Please Dont Go!

AC/DC used to get away with a lot back then, especially given that like many places in the world, Australia in the 1970’s was a very conservative society. Three songs that really highlight their larrikin attitude were Big Balls, Whole Lotta Rosie and She’s Got The Jack! Yet at the same time they could come up with a ballad showing a much softer side in Love Song (1975).

It must be remembered Bon was the ultimate wild man who truly lived the sex, drugs and rock n roll lifestyle, so nothing he ever did should have come as a surprise! He was apparently labelled “socially maladjusted” (an extreme difficulty in dealing appropriately with other people – typically display a persistent pattern of willful refusal to meet even minimum standards of conduct…..ha ha that sounds like Bon) by the Australian Army who rejected him before he became a rocker!

My Mum gave me a treasured present in around 1986. It was a two box set in cassette tape of all the AC/DC studio albums released to that date (thanks Mum!). Remember cassettes tapes?! 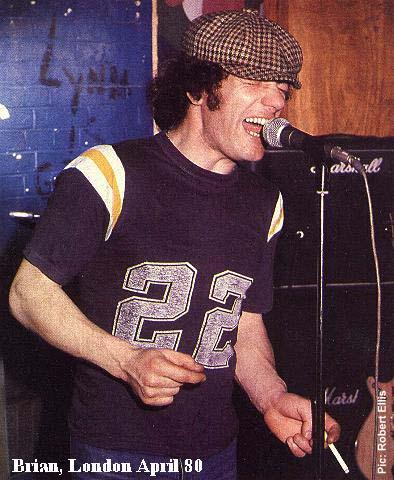 I thrashed the hell out of those tapes over the years and still have them today. But I would not be game enough to listen to them anymore, they haven’t been played for at least 15 years and must be very fragile today!

Eventually I upgraded and back catalogued to CD’s and added the following to the collection: If You Want Blood (1978 – live 1978 concert recordings), ’74 Jailbreak (1984 – a US release EP of 5 tracks that had only previously been released in Australia in 1974), Blow Up Your Video (1988 – I had this on cassette tape too – the only studio album from this period to not actually have a title track, so I added “That’s The Way I Want To Rock N Roll” to the link which has part of the title in it’s lyrics), The Razors Edge (1990 – I also had this on cassette tape, this album included their massive hit Thunderstruck), Live (1992 – live 1990-1991 concert recordings), Ballbreaker (1995 – I went the concert when they toured this album in Australia) and Stiff Upper Lip (2000 – also went to this concert in Australia).

Then the band went into hiatus for 8 years until their excellent “comeback album” Black Ice (2008). I went to two awesome concerts for the Black Ice tour, one in the USA in 2009 and one in Australia in 2010. They played this classic animated clip at the start of each concert which finished with an explosion and a huge mock-up “Rock N Roll train” would burst out on stage! I also added to my collection Backtracks (2009) a collection of the band’s studio and live rarities together in one box set including a DVD of music videos and live performances.

In 2010 a free exhibition entitled “AC/DC – Australia’s Family Jewels” was shown in Melbourne, Australia to coincide with AC/DC’s “Black Ice” world tour (the fastest selling tour in Australian music history). This was an exhibit of various old photos, posters, outfits, letters and music memorabilia from the band’s history.

A great exhibit which has gone on to tour around Australia and is now in Scotland where it has been rebranded as “AC/DC – Scotland’s Family Jewels” (to reflect the family heritage of Bon Scott and Angus and Malcolm Young who were all born there but grew up in Australia). Next year it will be displayed in Seattle, I wonder what they will call the exhibit here?

Also in the Melbourne CBD there is a laneway called”AC/DC Lane” (renamed in honour of the band in 2004. The street sign has been stolen many times!) and it also had a lot of street art posters put up at the same time as the exhibit showing various images of AC/DC including their original lead singer Dave Evans (1973-74). This was pretty cool and created quite a lot of foot traffic through there at the time. The band were based in Melbourne for a while and the famous Long Way To The Top video was filmed there on the back of a truck along Swanston Street in 1976.

Given that Black Ice was such a successful album (they even finally won their first Grammy Award in 2010 for the song War Machine) and a massive world tour that ran from 2008-2010, the band may take a break for a while, but I hope we don’t have to wait another 8 years for a new album!  AC/DC, AC/DC, AD/DC! Angus, Angus Angus! They still rock as hard as ever!