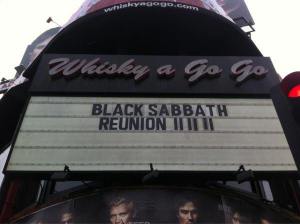 On this day at the Whisky a Go Go in Los Angeles, California a press conference announced a 2012 reunion of the original line-up of the legendary British heavy metal band Black Sabbath (Ozzy Osbourne – vocals, Toni Iommi – lead guitar and only continuous band member, Geezer Butler – bass and Bill Ward – drums)! The venue was chosen as it was where Black Sabbath played for the first time in the US exactly 41 years ago to the date.

The band formed in 1968 in Birmingham, UK as a blues rock band called Earth but changed it the following year to Black Sabbath (due to another band with the same name getting a recording contract). Tony Iommi  wanted a scarier sound and Geezer Butler was attributed with coming up with their darker image and heavier sound especially through the wicked song he wrote Black Sabbath (still holds up today as one of the best metal songs of all time).

Man did it work, this change helped them become huge around the world. The Ozzy years of Black Sabbath produced many legendary metal tracks and lead to them selling over 70 million albums! Their heavy sound, dark lyrics and image has influenced all heavy metal since and they are known as the band that essentially started the genre (a strong contrast from the hippie and folk music scene that was so popular in those early years)!

The reunion in 2012 will include a world tour (kicking off at the UK Download  Festival in June 2012 with further dates to be announced) and their first studio album of completely new material in 33 years! Unbelievable! Rumours have been floating around for months as little snippets of info were leaked out from Toni Iommi (had denied any reunion) and Ozzy Osbourne but until this official announcement it seemed like it would never happen again! These guys are all now in their 60’s!

Note: Due to Tony Iommi receiving Lymphoma cancer treatment the world tour was delayed until 2013 and the band only played a small show in Birmingham, UK (the home of metal); the massive Download 2012 festival in Donington, UK (which I attended with over 100,000 other people!) and strangely Lollapalooza in Chicago, IL USA.

The band said in their press conference that the new album tracks written so far by Tony Iommi are like the raw Sabbath sound of old and really good (I can’t wait). The album will be produced by Rick Rubin. He has famously produced bands such as AC/DC,  Metallica, Slayer and Slipknot and is regarded as one of the best in the business.

Apart from Black Sabbath other classic songs of the Ozzy Black Sabbath years include: Paranoid, War Pigs, N.I.B., Iron Man, Children of the Grave, Sabbath Bloody Sabbath, Never Say Die and one of my absolute favourites Symptom of the Universe. Here is a good set from the boys on German TV “Live at the Beat Club” in 1970 (with a surprise cover of Blue Suede Shoes!).

Ozzy was kicked out of Black Sabbath in 1979 due to his drug use. Over the years since then numerous musicians have played in the band and their have been a number of singers including Ronnie James Dio (1979-82, 1991-92 and under the banner of Heaven and Hell in 2006-2010 who I saw tour in Australia in 2007, I was meant to see them perform again in June 2010 at Sonisphere in Switzerland but sadly Dio passed away from stomach cancer in May 2010 – click here for a nice tribute to him R.I.P. R.J.D.), Ian Gillian (1983-84 – unfortunately only one album Born Again which has some great songs) and Tony Martin (1987-1991 and 1993-1997, he actually ended up being one of the longest term singers for the band but had the least success). Ultimately the original line up has always been considered the best with the Dio years a close second (personally I like both eras, very different vocal styles but both had great song lyrics with that classic metal guitar and drums that Sabbath are famous for).

Some of the great songs in the non Ozzy years included Dio: Heaven and Hell, Neon Knights, Children of the Sea and Mob Rules; Gillian: Trashed and Martin: Born to Lose.

Tony Iommi and Geezer Butler have provided some of the greatest heavy metal guitar riffs of all time and are rated as being one of the best metal guitarists in the world (and along with Led Zeppelin guitarist Jimmy Page basically invented that heavy riff style of playing in those early years). Iommi is actually missing a couple of finger tips from a sheet metal factory accident when he was 17, he wears special thimbles to extend those fingers so he can play guitar! Ozzy went on to have a massive solo career despite his various drug and alcohol addictions (he is now clean and sober) and has sold over 100 million albums worldwide. All band members have consistently performed in various band and solo projects since 1968. 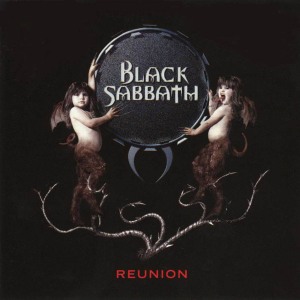 The original lineup has appeared together since 1979, but not since 2006. They did a one-off performance set for Live Aid in 1985 (huge concerts in US and UK arranged by Bob Geldof to raise funds to stop famine in Ethiopia), then reformed and toured for Ozzfest (a heavy metal music festival founded by Ozzy Osbourne) in 1997, a European tour in 1998, released a live album “Reunion” that year with 2 new songs “Psycho Man” and “Selling My Soul“, Ozzfest again in 1999, in 2001 they attempted to record a new album but other band commitments prevented this from happening and then Ozzfest again in 2004 and 2005. In 2005 they appeared together for their induction into the UK Hall Of Fame and in 2006 they were also inducted in the US Music Hall Of Fame where Metallica played in tribute to the band.

Of the must see bands in my life, I have seen all the ones I have wanted to except for this original Black Sabbath lineup (it just hasn’t worked out to get to their previous tours from Australia). The other bands include:

AC/DC in 1996 (“Ballbreaker“), 2001 (“Stiff Upper Lip“), 2009 and 2010 (“Black Ice“) – three shows in Melbourne, Australia and one in Foxborough, MA. The “Black Ice” show in Melbourne was memorable as they did a tribute to former lead singer Bon Scott  by singing High Voltage and showing huge images of him on the various big screens. This was the only time they did this on the tour (the date was very close to the anniversary of the tragic death of Bon on February 19, 1980). On a side note these “Black Ice” concerts were the fastest selling in Australian music history and extra dates had to be added to meet demand!;

Heaven and Hell in 2007 (“Black Sabbath – The Dio Years” Melbourne) – a huge sing along with Dio was awesome, Iommi and Geezer played brilliantly;

Iron Maiden in 2008 (“Somewhere Back In Time” Melbourne tour was a veritable treasure trove of 1980’s metal) and 2011 (“Final Frontier” Melbourne) – a dream come true, it took nearly 25 years to see them but was well worth the wait! Evil Eddie….brilliant! A few days after that 2008 concert I got to meet lead singer Bruce Dickinson at a small country air show. Totally unexpected and an absolute highlight for me as I have been listening to him sing since I was a young teenager (he was surprised anyone knew who he was. He was there to do some stunt flying in an old military jet)!

KISS in 2001 on their “Farewell” tour in Melbourne (didn’t quite work out to be true as they are still touring) – this show was meant to be with the original lineup but drummer Peter Criss was a late withdrawal and was replaced by their other long-term drummer Eric Singer. This was an amazing show, but the highlight for me was seeing Ace Frehley perform his guitar solo;

Metallica in 2004 (“St. Anger” Melbourne) and 2010 (“Death Magnetic” – this show was special as it was at the Sonisphere Festival in Switzerland and was also part of the first ever “The Big 4” shows with the American Thrash Metal Pioneers – Slayer, Megadeth and Anthrax. Nearly 3 hours of thrash metal from Metallica alone, these guys appreciate their fans and they show it. This festival was also memorable for being freezing, with 8 hours of rain and then 8 hours of sloshing through a sea of mud whilst listening to an incredible metal lineup!;

Motorhead 2010 (Sonisphere Festival Switzerland) and 2011 (“The World Is Yours” Phoenix, Arizona) – Lemmy is a legend, well into his 60’s he still rocks hard and parties harder;

Ozzy Osbourne in 1998 (“Retirement Sucks” Melbourne) and 2008 (“Black Rain” Melbourne) – the Ozzman cometh and all is good when the Prince Of Darkness sings;

The Rolling Stones in 1995 (“Voodoo Lounge” Melbourne at the MCG our biggest stadium) and 2006 (“A Bigger Bang” Melbourne) – the Stones are the ultimate showmen and hearing all their classic tracks live was an amazing experience.

Seeing these bands was awesome and a dream come true for me, but an original lineup Black Sabbath tour for me will be the ultimate (I am excited)! I have seen hundreds of bands over the years but those previously mentioned are essentially the ones I have listened too constantly since I was a young teenager! Now for the long wait until Black Sabbath tour dates are announced and tickets go on sale! All hail Sabbath!!!!

2012 Update: In June 2012 I attended the Download Festival in the UK and got to see Black Sabbath play live! What an experience this was, standing in anticipation with over 100,000 people, then all of us starting chanting the riff to Iron Man….an amazing experience that gave me goosebumps! A long held music ambition had been fulfilled. \m/

2013 Update: The new Black Sabbath studio album titled “13” will hit the stores on June 11th, 2013.  The band has been working hard on the album (the first full studio album with the more or less original lineup since Never Say Die in 1978!) As we all know due to contractual disagreement original Black Sabbath drummer Bill Ward will not feature on this album, his place has been taken by Rage Against The Machine drummer Brad Wilk.

The album has been produced by Rick Rubin. Some of the track titles from the new album are slated as follows:

I can’t wait to hear this album!