Duff McKagan; musician (bass player with Guns N’ Roses 1985-1997, Velvet Revolver 2002 -2008 and Duff McKagans Loaded ongoing since 1999 to name a few), writer and Seattlelite treated his family, friends and fans to an interesting and entertaining evening at the Neptune Theatre in Seattle’s University District tonight. With the recent release of his autobiography It’s So Easy, And Other Lies he has embarked on a book signing tour, but for his hometown he put on this special one off show that was part book reading, part musical performance, followed by a Q&A session. Duff explained it as a multimedia experience and that it was, with the entire show being accompanied by a band (including Jeff Rouse from Loaded and other local muso’s that are Duff’s friends) and onscreen video and photo images behind them.  He also grew up right near the theatre so it was the ideal venue for this performance. 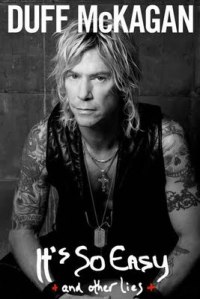 The title of his book comes from the Guns N’ Roses song It’s So Easy that was co-written by Duff and featured on their first studio album Appetite For Destruction (1987). Duff read various excerpts from the book and the band would play applicable music from the relevant periods being discussed, from time to time he would play guitar while reading and at other times he would play and sing a partial song such as Knockin On Heavens Door or play part of the guitar riff from a track such as Sweet Child O’ Mine. This all blended really well with the book readings.

So what did he read and talk about during the show? Initially he started with a chapter on his daughters 13th birthday and how even though he was a rock star his kids just thought he was a dorky dad, and was meant to keep out of the way! He stumbled onto some kids making out at the party and thought to himself when I was their age I was drinking and doing drugs, they are not even touching, it’s ok! This was the perfect lead into his excessive sex, drugs and rock n’ roll lifestyle and his eventual transformation into a clean, sober family man.

He moved onto the early punk scene in Seattle in the late 1970’s early 1980’s and his involvement in bands such as Vains (he formed this band at 15) and The Fartz (!) which later became a post punk band called 10 Minute Warning. He actually played drums, guitar and bass in many Seattle bands, some of which apparently only ever performed once! In 1983 he wanted out of the then rampant heroin addled scene in Seattle, so he moved to Los Angeles (like there were no drugs there!) where he applied for a bass player job advertised by some guy called Slash!

Duff and Slash met and formed a short lived band called Road Crew with drummer Steven Adler. He made friends with another guitarist Izzy Stradlin who in 1985 was forming a band with a new upcoming singer…….Axl Rose and members of another band LA Guns. After the quick departure of the LA Guns members Duff, Slash and eventually Steven Adler all ended up joining that band…..Guns N’ Roses and set about to quickly become one of the biggest music success stories of the 1980’s and 90’s (they have sold over 100,000,000 albums world-wide).

Duff said on meeting Axl Rose “this dude was different and powerful, and f**cking serious! He hadn’t yet entirely harnessed his voice. He was more unique than great at this point, but it was clear he hadn’t moved out from Indiana to California for the weather. He was here to stake a claim and show the whole f**cking world what he had”!

With the fame and success of the band came all the rock n’ roll excesses though. Duff fell into a hazy world of drug and alcohol addiction that lead to the breakup of his first and second marriage. His days back then were often clouded with “where am I” and he discussed that terrible moment in the band’s history in 1991 at the Riverport, Ampitheatre in Missouri when Axl told security to stop a guy in the audience taking photos, they didn’t so he jumped into the crowd and attacked the guy. He was dragged back up on stage and said “Well, thanks to the lame ass security, I’m going home” and he slammed the microphone into the stage and walked off! The concert ended abruptly and then all hell broke loose in a riot where dozens of people were injured and the venue was trashed! Axl was charged by the local police with inciting a riot but was not arrested until a year later due to overseas touring. A judge eventually ruled he was not directly responsible for what happened.

He discussed one tour where he and Slash  were called into an office by the band manager, who was in there with Axl, he and Slash were asked to sign a contract that would leave the name of Guns N’ Roses to Axl if anything happened to them (they must have been getting pretty unstable), they signed it. From there Duff’s personal life spiralled downwards leading to a complete pancreatic failure (from alcohol abuse) in 1994, he had to sober up! Which he did, and got fit with martial arts, he even went to school to study business finance management (after realising he was a rich man who knew nothing about money and didn’t want to end up being broke some day!). He left Guns N’ Roses in 1997 (all the other original members apart from Axl had left before this time), moved back to Seattle, met his third and current wife the model Susan Holmes and had a baby (later they had another child – 2 girls).

He was happy and sober for the first time in a very long time, playing in various bands including Loaded, then an opportunity came up to form the “supergroup” Velvet Revolver with former Guns N’ Roses band mates Slash and Matt Sorum, Loaded guitarist Dave Kushner and Scott Weiland  the lead singer of Stone Temple Pilots. Scott  is a famous and unpredicatable drug addict, Duff found life back on the road in such company lead him back to taking drugs.

Somewhere in that possible path of self-destruction he realised he had a great family at home, he dragged himself out of addiction once again got his life back on track for good and is now a happy sober family man with his one successful band. No matter what though, his kids still think he is a dork (but they have now asked him to teach them to play guitar)!

For the finale before the Q&A, he and the band played the full version of It’s So Easy. Duff said “We can’t have a night like this without some rock!”, they played the song enthusiastically and the crowd showed their appreciation. Well done! 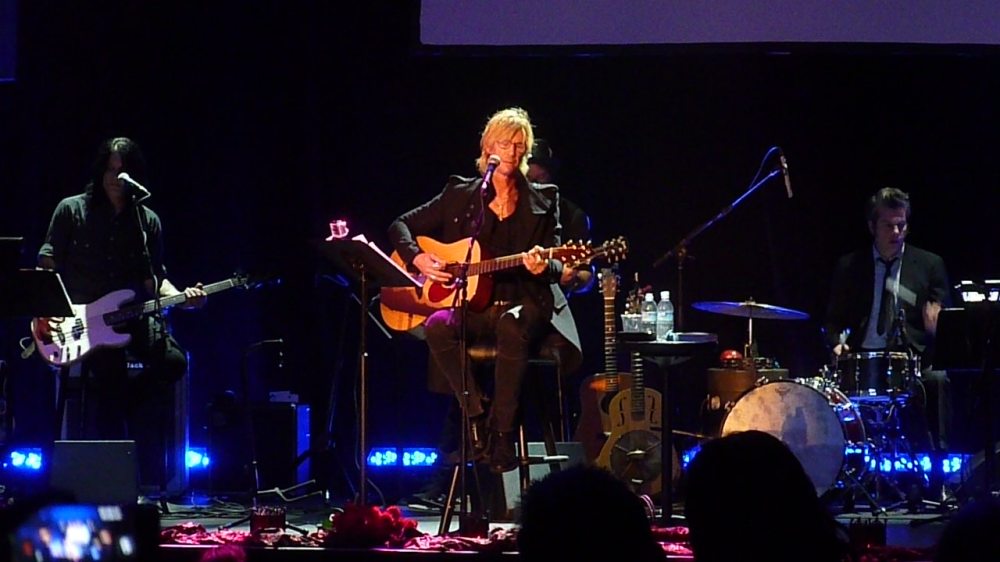 During a 10 minute break (and prior to the show starting), members of the audience were requested to fill out question cards for Duff and he would answer some of them. He returned to the stage with a handful of these question cards, but prior to this he thanked us all for coming (even though it was his home town he wasn’t sure if people would come – the place was packed) and then mentioned his family and friends who were in the crowd (managing to embarrass his daughters again!).

As he started to work through the questions, it was kind of funny as there were some he did not want to answer, they must have been about Axl Rose so he would just say out loud “no!” and move on to the next one. He did mention that he and Slash are forever bound by their music, and that he and Izzy are still great friends to this day.

One of the questions was what were some of his favourite gigs? His answer: Not the big stadium shows, but some of his first gigs in Seattle playing in venues where his heroes like Led Zeppelin had once played and also when Guns N’ Roses first sold out the Troubadour in Los Angeles were what stood out in his mind.

He was joined on stage by Kurt Bloch a good friend and the guitarist for another old Seattle band Fastbacks (which Duff once briefly drummed in). They joked about a bit, then drew a winner for the bass guitar that Duff played during the show, a girl standing near me won it! She went crazy, much to the entertainment of all!

Duff once again thanked us all to much applause. What a great night!

p.s.  a day or two after this event Duff was doing a Q&A and book signing at Seattle University when some nut started verbally hassling him about his comments that he was one of the last people to speak to Kurt Cobain before his death in 1994. Click here to see how Duff dealt with this (WARNING: explicit language)! GO DUFF!